Join Waitlist We will inform you when the product arrives in stock. Just leave your valid email address below.

The Keys have something for every diver who likes to explore wrecks and their artificial reef habitats. From the deep and intact Coast Guard Cutters’ Duane and Bibb, to the shallow scattered Benwood, the scuba diving in the Florida keys have an enormous variety of wreck dives for all skill levels.

Down since 1942, the Benwood lies scattered about in 25 to 45 ft of water near Elbow Reef at Key Largo. This W.W.II freighter was dodging German U-boats off the Florida coast when she collided with another ship. The Benwood was run aground and later salvaged before being blown apart to eliminate a boating hazard.

The bow is the most intact piece, home to large schools of Pork fish and grunts. Resident lobsters, moray eels, and glassy sweepers are found lurking in crevices and crannies throughout the wreckage. Sergeant Majors and Goat fish school nearby and there are dozens of Christmas Tree Worms attached to the fire coral on her hull. This wreck is shallow enough for all skill levels and is a great night dive. 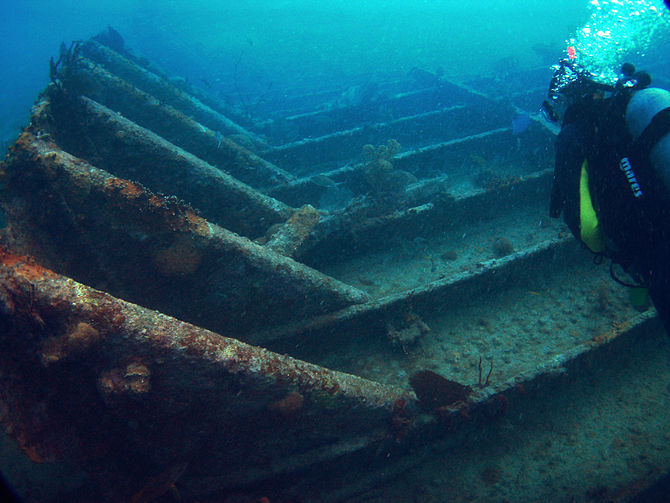 English: A scuba diver checks out the Benwood shipwreck, sunk off the coast of Key Largo, Florida in 1942. (Photo credit: Wikipedia)

The 137 foot USA Coast Guards Cutter was intentionally sunk in 1987 along with her sister ship, the Bibb. The Duane sits upright in 120 ft of water a mile south of Molasses Reef. Both of these wrecks are considered advanced dives due to the depth and usual strong current in the Gulf Stream. The crow’s nest extends up to about 50 feet, surrounded by schooling barracuda and encrusted with sponges and fire coral.

The bridge is at 70 feet, now home to massive schools of grunts. Wide doorways and portholes provide diver access and wonderful photo opportunities. The ship railings are vibrant with encrusting sponges. Large schools of chubbs,barracuda, jacks, and smaller tropical make the Duane a serene and beautiful artificial reef.

The crow’s nest of the Duane in March 2007 (Photo credit: Wikipedia)

Situated about a half mile from the Duane, the Coast Guard Cutter Bibb lies on her starboard side in 130 ft of water. The deck railing is at 90 feet and the water conditions are usually the same as the Duane.

Owing to the clear Gulf Stream, the visibility at both wrecks is usually very good, however, the current runs at a pretty good clip, so this is recommended for experienced divers only. The ship’s open areas collect a phenomenal fish population. Many dives on these two wrecks are needed to see everything; because of the depth, bottom time is limited.

Built in 1936 as a buoy tender, this 187-foot vessel has a colorful history as a freighter and Cuban refugee vessel. After spending several years tied up to a government dock after she was confiscated, the vessel sank in place and was then re-floated.

In 1985 she was being towed out to sea for burial when vessel sank in nearly 90 feet of water resting on her side. Later that year, Hurricane Katrina lifted the vessel upright. The hull is intact with the deck at 70 feet. The hatches are open and their dark interior is home to huge Jew fish & moray eels.

This freighter got her final name from the Eagle Tire Company who assisted in sinking her as an artificial reef in 1985. She sits on her starboard side in 110 ft of water off Islamorada. At 95 feet, the prop and rudder are completely coated with corals and sponges.

The interior of the Eagle is accessible, but divers are not encouraged to penetrate the hull unless experienced as wreck divers, and with a guide. Two masts are focal points for big schools of snappers, wrasse, and jacks. Orange and red encrusting sponges provide a dramatic contrast to the deep blue ocean.

Intentionally sunk as an artificial reef in 1986, this 188-foot ship was used to study lightening. Florida Power and Light blew ionized particles into the atmosphere during storms to trigger lightening strikes for research study. The big cable spool dominates the bow deck attesting to her days as an Army cable layer. The Thunderbolt lies upright at 120 feet with the bridge at 80 feet. The engine compartment is open, allowing entry into the deepest part of the ship.

A large barracuda is usually found in the wheelhouse and huge angelfish and Jew fish are sited frequently. The twin screws are encrusted with red and yellow sponges and hydro-ids. Strong currents are often present at this dive site, and gloves are recommended because of the fire coral coating much of the mooring buoy and down-line to the ship.